Following establishment of the MIC, a concentration-dependent killing assay (time-kill assay) was conducted against each serotype. From data generated from the time-kill assays the impact Micro-Aid had on bacterial growth was assessed.

All Salmonella serotypes tested were inhibited by Micro-Aid® concentrations of 10 mg (MIC) of saponin per mL of media. These MICS are comparable to the MICs for many other species of bacteria, e.g., E. coli, Clostridia perfringens, etc., that have been tested to date. 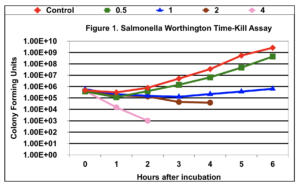