Bloat is a digestive disorder characterized by an accumulation of gas (primarily carbon dioxide and methane) in the rumen. This gas is produced as part of the normal process of rumen fermentation and is naturally lost by eructation (belching). Bloat occurs when this loss of gas is prevented. Furthermore, rumen expansion from this gas buildup puts pressure on the diaphragm and lung of the animal, which reduces or cuts off the oxygen supply and, in extreme cases, can result in death by suffocation.

Bloat in cattle is categorized as one of two types, frothy bloat and free-gas bloat. Frothy bloat is by far the most common form and happens as a result of a stable foam developing on top of the rumen liquid, which blocks the release of the gas. The occurrence of frothy bloat can be highly seasonal with peaks in the Spring when cattle have access to rapidly growing forages (particularly legumes). The second and less common type of bloat is free-gas bloat, which occurs when a physical obstruction blocks the esophagus and prevents the animal from belching.

Micro-Aid® is an all-natural, environmentally safe technology that is used extensively in the livestock and poultry and industries to maximize health and performance by creating a better environment, both internally and externally.

Early rumen metabolism research demonstrated that Micro-Aid® alters the rumen microbial population, including reducing the concentration of rumen protozoa. Recent research efforts have focused on better understanding the effects Micro-Aid® has against bacteria common to the intestinal flora of domestically raised food animals and how this relates to promoting a healthier gastrointestinal tract environment.

The phytogenic extract used in the manufacture of Micro-Aid® is known to have surfactant properties, which exists because of its chemical structure, having two major parts, an organic ring structure and a carbohydrate sidechain.

Surfactants function to lower the surface tension of a liquid or the interfacial tension between two liquids, allowing for easier dispersion, spreading, or wetting.

The means by which Micro-Aid® could function to mitigate the incidence of bloat in cattle first comes from its role in the rumen fermentation process. Research results in both feedlot and 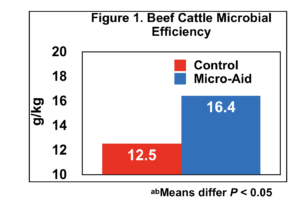 dairy cattle demonstrate the impact Micro-Aid® has to improve the production of microbial protein. As demonstrated Figure 1, the addition of Micro-Aid® to a feedlot ration increased the microbial efficiency of organic matter truly fermented by 31%. A similar response was noted when Micro-Aid® was evaluated in a dairy ration as the results in Figure 2 report a 15% increase in the efficiency of microbial protein per kilogram of organic matter fermented. By improving the efficiency of this rumen fermentation process, there are less substrates that would be directed towards the energetically inefficient process of gas production. This reduction in methane production is demonstrated in Figure 3, which report the results of an in vitro experiment evaluating the impact of Micro-Aid® on methane reduction in a variety of diet (forage to concentrate ratio) and forage types. 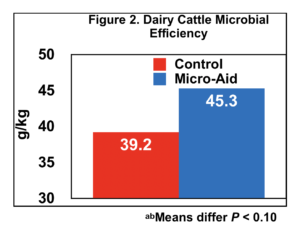 As was previously mentioned with frothy bloat, the release of gas is blocked by a foam layer that develops on top of the rumen environment. This foam increases the viscosity of the rumen fluid and prevents the small bubbles of gas formed by rumen fermentation from coming together to be belched off. Thus, the surfactant properties of Micro-Aid® could benefit this situation by helping to lower the surface tension and allow for easier dispersion.